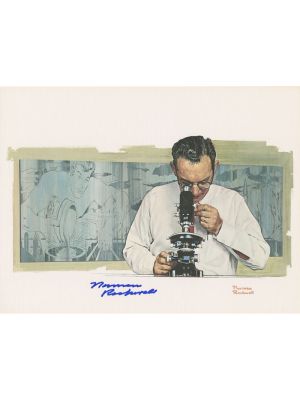 In 1968 the Sharon Steel Corporation commissioned Norman Rockwell to produce a series of advertisement illustrations depicting "The men and machines of modern steelmaking" immersed in various stages of steelworks operations.

Then 72 years old, Rockwell worked with his third wife, Molly, over a four-day period in photographing the men who were subjects in this series of illustrations. He later completed the 23-by-30 paintings in his studio at the time, in Stockbridge, Massachusetts. However, Rockwell only painted the figures of the workers; the elaborate industrial backgrounds in sharp perspective were created by Cleveland illustrator Tony Dennison.

The Sharon Steel Corporation was a steel plant company located in Farrell and Sharon, Pennsylvania, notable due to its contribution toward the growth of the iron and steel industry in the Shenango River Valley, Mercer County, Pennsylvania. The company ceased operations in 1992 after filing for bankruptcy for the second time in less than six years, but remains the foundation for the future growth of the iron and steel industries. Many of the personnel who were affiliated with this company have gained both local and national recognition for their contributions to the American steel industry.

The purchase of any limited edition Norman Rockwell print is accompanied by an Authenticity Certificate signed by our Museum Director, a complimentary one-year Museum family membership, and care and handling instructions for the print. Payment plans are available. Please contact us for more information at 413.931.2237 or Email: MDuffy@nrm.org